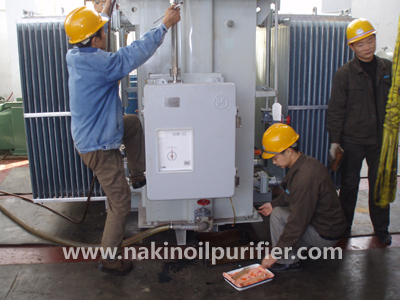 (1) Insulation effect: Transformer oil has much higher insulation strength than air. Insulating materials immersed in oil can not only improve the insulation strength, but also protect them from moisture. (2) Heat dissipation: The specific heat of transformer oil is large, and it is often used as a coolant. The heat generated during the operation of the transformer causes the oil near the iron core and the winding to expand and rise through heat. Through the convection of the oil, the heat is dissipated through the radiator to ensure the normal operation of the transformer. (3) Arc extinguishing effect: on the oil circuit breaker and the on-load voltage regulating switch of the transformer, an arc will be generated when the contacts are switched. Due to the good thermal conductivity of the transformer oil, and the large amount of gas that can be touched under the high temperature of the arc, a large pressure is generated, thereby improving the arc extinguishing performance of the medium and making the arc quench quickly. Transformer oil performance requirements: (1) The density is as small as possible to facilitate the precipitation of moisture and impurities in the oil. (2) The viscosity should be moderate, too large will affect the convection heat dissipation, too small will reduce the flash point. (3) The flash point should be as high as possible, generally not lower than 135℃. (4) The freezing point should be as low as possible. (5) The lower the content of impurities such as acid, alkali, sulfur, and ash, the better, in order to avoid their corrosion of insulating materials, wires, fuel tanks, etc. (6) The degree of oxidation cannot be too high. The degree of oxidation is usually expressed in acid value, which refers to the amount (mg) of potassium hydroxide required to absorb the free acid in 1 gram of oil. (7) The stability should not be too low. The stability is usually expressed by the sediment of the acid value test, which represents the ability of the oil to resist aging. Why use oil for high voltage transformers? The oil inside the power transformer is a special "transformer oil", its role is to enhance insulation and cooling. The heat generated by the transformer is radiated to the outside by the heat circulation of the oil to the outside. The large transformer and the fan cool the oil. Now that transformer manufacturing technology and the use of new insulation materials, some small and medium-sized power transformers can also be used.

Transformer oil has moisture, gas, impurities, and the oil breakdown voltage coming down, so it needs to be processed by vacuum oil filtration. We recommend the vacuum oil filtration plant of NAKIN Company (http://www.nakinoilpurifier.com), which has rapid dehydration and degassing. The function of removing impurities can improve the oil breakdown voltage.

Problems with the oil purifier heater